Imagine regaining consciousness, drenched in sweat, hyperventilated, confused and fatigued to the point of literally not being able to lift your own head, and barely able to open your eyes. Imagine not knowing where you are, who you are or what you were doing moments ago.  It's only natural to wonder, who are these people? What do they want? Why are they looking at me so strangely and most importantly, why are they all standing over me? These are just some of the basic questions you ask yourself and may not be able to answer after a grand mal seizure.

Now, if you can, picture this happening in public, some place you frequent, somewhere you will be recognized. Try to envision the focus it takes to return to the scene of an incident like this, while holding your head high and finding the inner strength to continue with your life unapologetically.  If you can picture any portion of this, you'll have a glimpse into what encompasses the daily life of an epileptic.

I started walking at eight months old. I had my first seizure shortly thereafter. Initially thought to be temper tantrums, the frequency and intensity increased, resulting in a loss of consciousness every six weeks. When I had to be revived with artificial respiration at the age of four, I was officially diagnosed with epilepsy and prescribed phenobarbital to control my seizures.

Since this was all happening at such a young age, I didn't recognize my life as being different from anyone else's. All I ever remembered was an occasional overwhelming shift in gravity, internal shaking, and utter listlessness afterwards.

I have always been an extremely active person with a highly competitive nature. My first evidence of that was the hundreds, if not thousands, of potential siblings I outswam, just to get here. My mom had difficulty getting pregnant with me... and, YES, I count all victories! (direct or indirect).

Later I discovered my first love, sports. I believe the physical conditioning that resulted from my drive to develop the skills and coordination necessary to compete in organized youth sports helped me turn the corner. Before long I was playing basketball for my high school, the community league and summer leagues. By the end of my high school career, I was a six varsity letterman with letters in three sports. I received over 100 scholarship offers from colleges, recruiting me in football, basketball, and track & field. I had completely outgrown my epilepsy, or so it seemed.

Without warning, my sports career abruptly ended in college with a concussion I suffered in a game that later resulted in a, "fainting spell." Alone in my dorm room, I stood up, stretched and regained consciousness, with everything on my dresser lying broken around my head on the floor next to me.  An E.E.G. showed no abnormality...a.k.a. no epilepsy. But I figured the hits would only get harder. I had grown into a 6'2", 225 lb. wide receiver with solid hands who loved the contact across the middle of the field and looked to punish opposing team players with every opportunity that presented itself.  I knew direct contact to my body would only get harder at the higher levels, so I decided to make a quality of life choice and walked away.

Fast forward twenty years. Happily married with many accomplishments under my belt in sales, recruiting and management, I'm standing in the office with a co-worker, who cracks a joke.  As I began to laugh, I felt something strange happening to me. There was suddenly a deafening, high pitch tone. Everything went dark and I could feel the ground shaking underneath me. Passing in and out of some state of brief consciousness, I faintly remember the sensation of people pulling at me while I struggled for air. I woke up disoriented, on a stretcher outside of an ambulance, with my wife in tears standing over me.

As the E.M.T.'s lifted me into the ambulance, I gathered myself together enough to ask, "Is everyone else okay?" I had assumed that the building collapsed, a water heater exploded, or some type of natural disaster had occurred. Immediately everything came back into focus for me with three words from the paramedic, "Are you epileptic?" For the first time in my life at the age of 40, I had to admit to myself, as well as acknowledge out loud to someone else, "Yes, I am."  After being seizure free for 20 years, they were back...with a vengeance!

Before we found Epilepsy Services of Southwest Florida, the frequency of my seizures had reached once a month.  Working closely with my doctors and counselors, we were eventually able to find the medication and levels that work best for me.   I'm roughly one and a half years, seizure free.

Since the "episode in the office", with the support of my family, I've lost 100 lbs. I meditate regularly, medicate religiously, eat reasonably, walk vigorously, and sleep routinely.  Don't get me wrong. I don't believe that there are any number of push-ups that will cure epilepsy. But I do believe in giving myself the best chances possible. Especially, when in a vulnerable state. So, as a matter of practicality, I have made it my goal to be in the best physical condition of my adult life by my 50th birthday. I don't think it's coincidental that as my health has improved, my seizures have become less frequent.

In short, I believe every person is born with a special gift or talent to offer the world. However, it is up to each of us to discover its nature and nurture it, ourselves. Perhaps epilepsy can also be viewed as a gift, if by embracing it, we learn to better our lives and possibly help others to improve upon their own.

My case manager was also Bobbie, she was very compassionate, caring, and there when I needed her. I will never forget you guys for taking me thru my journey. Thank you very much, and especially Bobbie ~Theresa 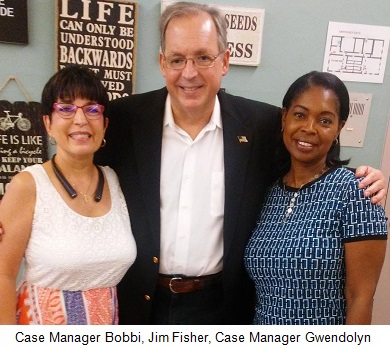 We would appreciate if you would take a moment to read about how Epilepsy Services of Southwest Florida has made a difference in the life of Jim Fisher.   This is his story, in his own words: "Epilepsy Services is perfect for people who seemed to have fallen through the cracks of life...People just like me."

There is nothing worse than watching your medication supply inexorably dwindle down, not knowing how or when or if you're going to get more.  Fearfully counting pills in anticipation of what's to come when they finally run out.  Because when that happens, all that's left to do is strap in, hole up and prepare yourself to be sick and miserable, and have your life taken away.

Early on, I grew to be very good at hiding my seizures. I learned that it upset people if they thought anything was wrong, so I became adept at pretending everything was okay.

Epilepsy is a cruel and lonely affliction.  It's not sexy. There are no celebrity endorsements, no twelve step support groups.  There's an element of shame and embarrassment that obliges us to isolate and live in silence.

I don't care how enlightened or educated they may be, the average person just doesn't understand what it's like to exist with this.  Even my own family - people who know me best, and love me most - don't have a clue.  I'd hear things like, “What are you ashamed about? You didn't do anything wrong; it's not your fault!”   I also learned that since I couldn't possibly explain it, I was better off just keeping quiet.

Then, one miraculous day I heard about Epilepsy Services of Southwest Florida.

Does such a thing actually exist? Really?!   I immediately made an appointment.

I arrived early, filled out sheaves of paperwork, and met with Bobbi Frasca. I fell in love with her then and there. It was obvious that she got it.  She was one of those rare people who actually understood.   Her message was, “There's no shame here.  Nothing to be embarrassed about. We'll make sure you get what you need.”  A huge weight had been lifted.  How could you not fall in love with someone like that?  She proved to be someone I could trust, and dealing with her was a treat.

A couple of years ago, I was notified she'd no longer be my case manager.  Instead, it was going to be someone named “Gwen”.  What?  Who's Gwen?. . .What a gyp.   After meeting her, it was clear I wasn't really losing Bobbi.   I was gaining Gwen.  I had nothing to complain about.

I'm here to tell you that Bobbi Frasca and Gwendolyn Howerton are the sweetest,  most conscientious and hardest working pros you could ever hope to know.

You need to understand that Epilepsy Services doesn't just make sure you're okay and get the medication you need.  They go the distance and assign you a doctor.  You're not just a client to these people.  You're one of their own.

When Gwen asked if I'd be willing to speak to you, my attitude was;  “Anywhere.  Anytime.  Anything you want. . .I can never possibly repay all you've done for me.”

If you haven't figured it out by now,  Epilepsy Services is a shining beacon of hope for so many who had lost all hope.

I'll always have epilepsy. That's my reality.  I accept that.  Thanks to Epilepsy Services, I'm no longer a voice in the wilderness living in fear." ~Jim